Preamble
Few city runs can match the experience of running around the National Mall in Washington DC.  I have run in the area as often as my travel the Capitol City would allow. The Marine Corps and DC National Marathons both offer races including this area.  I bet any number of smaller races are staged here too.

Where else can you be surrounded by monuments, museums, memorials and massive government buildings?  Big and small treats unfold over the miles of paths and tree lined walkways.  A good run (or walk for that matter) probably requires 5-8 miles to take in the breadth of the area.  I turned my 7 mile run into a photo exploration on August 23.

Equipped with my handy iPhone, I hit the street at my hotel at 14th and H Streets at 6:10 AM - about 25 mins before sunrise to ensure I would have wonderful morning light and not too bright a sky.  I hope you enjoy this Photo Run. Really, there is no right or wrong way to run in the area, and I hope if you journey here, you will bring your trainers.

The Photos
Here's the map of my run and the photo locations. 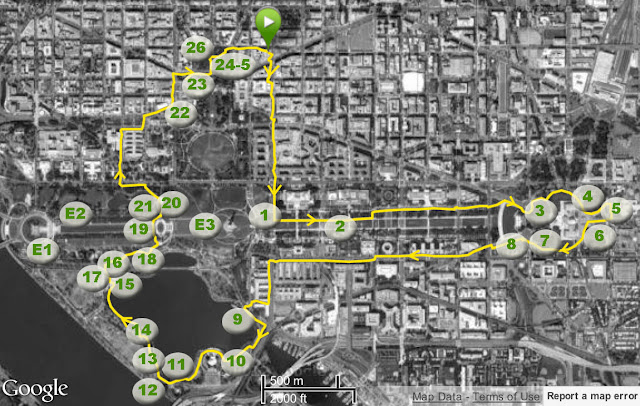 Bounding out of the Washington DC Hilton Garden Inn, I headed south on 14th Street until I hit the Mall. 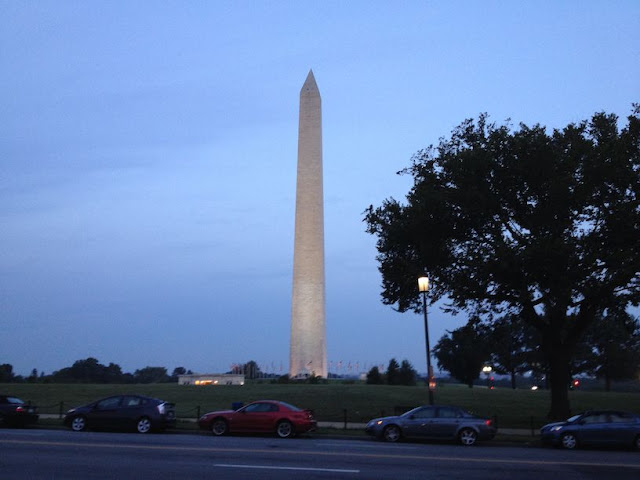 1. The Washington Monument by its height is fairly visible anywhere in the main DC area.  I hit the Nation Mall just in front of the obelisk and shot this facing west.  Without trying, numerous of my photos find this iconic spire in the background.  Sadly, the viewing deck is still closed from the 2011 Earthquake. 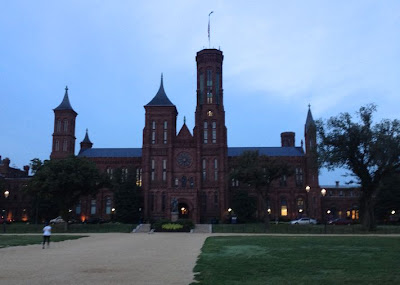 2. The Smithsonian Castle anchors the string of museums lining both sides of the Mall.  A fellow runner enjoys the dirt and gravel paths available for all sorts of exercise.  As my run unfolded, I saw more and more people out stretching their legs.  This image was taken facing south. 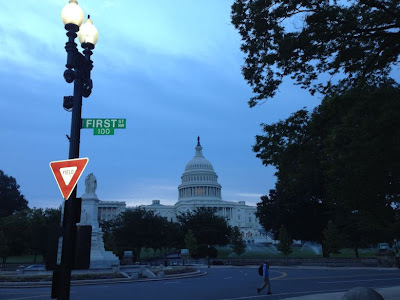 3. This post is called a Capitol Run, so next up are a few shots of the Capitol building which sits at the east end of the Mall.  It forms a line with the Lincoln and Washington tributes, and one of the diagonal avenues (Pennsylvania) has a direct via of the White House (and vice-a-versa of course).  The District was laid out with all of this in mind.  The sun was still not up, but this pre-dawn sky made for a nice background.  My flash fired which illuminated the street signs as you can see the street lights are still on.


As the Capitol sits on a hill, I had a small rise to navigate which I did around the north side.  I could just glimpse Union Station.  This led me up to my next photo location.