Easy Run in the Big Easy 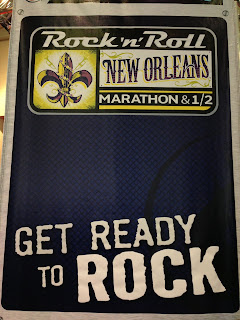 Sunday found me pounding the pavement of New Orleans - the Crescent City - as I attempted state 17 of my 50 state marathon quest.  Once known as the Mardi Gras marathon (since the event occurs just after that celebration), the race now belongs to the Rock n' Roll series.  The half seemed the most popular choice, but the marathon certainly did not lack for runners.  And in less than two days, I encountered grossly inaccurate airplane employees, bizarre parental decisions, a woman from Chattanooga (not that it matters) and fractious fraternity friends.

How did I get here anyway?
Why attempt Louisiana now, at state 17, on the list?

If you stare at the calendar of races as often as I do, you will ascertain that the majority of marathons occur between March and May and September and November.  The spring and fall provide the best weather for running, and while rain can be an issue in some areas, generally that is preferable to heat.

And, as you might imagine, smaller states generally have fewer marathons.  Simple population math.  For example, Rhode Island has just three marathons, and one requires a fast qualification time.  Larger states - California, Texas, New York or states with larger populations of runners such as Colorado and Washington - have many more races.  Hawaii also tends to a have a large number given the popularity of race vacations or "racecations" as my friend Miri calls them.

So, as I continue my assault on the roads and trails of the great United States, I need a strategy to be able to get in all fifty by my deadline.  Part of that strategy is trying to run those less race populated states when I can.  Hence, as my travel plans called for me to be in New York early Monday, I added in the extra 24 hours of travel and swung through New Orleans.

Upon arriving Saturday afternoon, I found that my luggage had not made it out of Los Angeles.  No need for panic though as I always take my race shoes, clothes and race food on the plane.  I was more bothered about waiting 30 minutes to find out there my luggage took a header than not actually having it.  The baggage agent assured me the bag was already on its way via Denver.

She said it would arrive that night.

I correctly guessed it would not since Denver had a snowstorm hitting it.