I believe any race that starts within 3/10ths of a mile of your house requires you to run it. How much more convenient can that be?

So, to stay true to my philosophy, today I ran the Dr. Susan Love Annual Love Walk/Run 5k. In it's 4th year of existence, the event circles the Huntington area of Pacific Palisades. Dr. Love added the run to the previous walk only event. Starting at 10 AM feels late to most people who run, but the event ends with a number of lunch trucks serving free food. If I thought eating a hot dog at 10:30 AM seems strange, I cannot imagine one at 8:30 AM. (Actually, I did not partake of the lunch trucks at all.)

Sadly, Dr. Love mispronounced my name at the ribbon ceremony, but for a race I didn't know about until 10 days ago and ran sort of on a last minute basis, not bad at all. And all for a good cause promoting Breast Cancer research locally in the Palisades and Santa Monica. (Dr. Love resides down the street from the race's start.)

Well, after two weeks of no running (but lots of cycling, swimming and CrossFitting), I hit the road Tuesday and Today to resume my weekly routine.

Tuesday's run was a short 4 miles that I did as part of the Japan Day Run for Hope. This event is a combination run in NYC and a virtual run. The virtual run means that participants can bang out the required 4 miles anytime between May 1 and May 22. The NY Road Runners Association set up the event. This is the group that runs the NYC Marathon everyone November.
So, on a very rainy (what else is new - see the post on March 20 about the LA Marathon) Tuesday morning, I took part here in the Palisades. So far, about 700 people have completed their virtual runs. I think I'm the only one from the LA area although I did some two women from Mammoth Lakes. There is a guy from Limerick Ireland. And I saw one from Cold Spring Harbor which made me think of Billy Joel. Most everyone hails from New York or New Jersey.
The rain really didn't bother me, and I was happy to get back to running. Today was sunny and I did 7.1 miles. This weekend I will cover 11-12 or so.
How do I feel? Certainly, I feel fine. I kind of wonder if the two weeks off produced any change. At times, my pace was quick both days, and I found keeping in the 7:30 range to be easy when I wanted. That's good since my next real race is the Palisades 5K on July 4 with hopes of coming under 19 minutes. I have to believe the time off can only be a benefit. Let's see how I feel after the long run in a few days.
Posted by Lairdo at 8:51 PM

The half run in Fort Collins on Sunday concluded the series in a sort of denouement closing statement. Instead of just building to the 50K ultra and then falling off like a stone, the series gracefully concluded with a shorter run than most of my "long" weekend runs. I'm glad I tacked this on not only because it took me to my cousins' in Colorado but also because I felt a better sense of closure. However, doing such a "short" distance left me sort of scratching my head why I didn't just runt he full. Probably next year I will.

As part of this spring season, I planned in two weeks of no running. So, after a short 3 mile run this past tuesday in Central Park (sort of a recovery run from the half) , the shoes get a break from the street pounding. More importantly, my feet and legs take that time off too.

Why? Well, prudence plays into the idea. I have just done the most intense running of my 5 year career. While I do not feel that bad - some nicks and tight spots - I do not want to find out if I am close to breaking down. The two weeks should give me sore muscles time to relax and recover. I will still be exercising (cycling, CrossFit and swimming), but I will not lace up until Tuesday, May 17. And when I do, my focus is going to be on the July 4 5K I have coming up. I will probably do another 5k and maybe a 10K before returning to the Marathon in the fall.

Another aspect of this time off is to also get me a bit starved to run. Honestly, I have no fatigue of running. I do not feel burned out or bored. However, I think I will enjoy anticipating coming back to it as well. Maybe this is my version of abstinence for lent? Wrong time of the year and wrong religion, but what do I know anyway? And anyway, I read a book on a guy who ran across the country at the age of 57, so it's not like I am taking time off thinking about running.

1:37:22 official time. (My 6th fastest half and fastest Fort Collins which is at 5000 feet elevation.)
From the official email:

Here are your results for the 2011 Colorado Marathon:

My cousin Jen took this awesome photo just before I crossed the finish line. 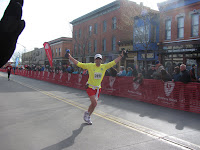