An Amiable Run Through the Heartland 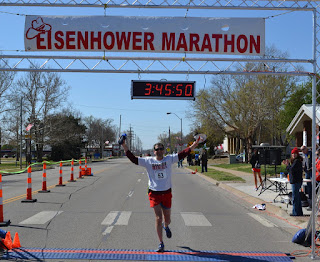 Early April found me truly in the heartland of the US on route to my 39th state marathon. Within 120 miles of the geographic center of the contiguous lower forty-eight, I was about as central as I was going to get on this 50 state quest.

Big city and small town marathons both appeal to me. In the big ones, I know that the courses will be generally lined with spectators and musical acts, DJs and other diversions. Amenities will be plentiful, but the size will demand more rigor in starting line procedures, security, bag pick up and finish line food and medal distribution. Small towns afford the same 26.2 miles, but I get closer to the event and the area. With only 101 marathon finishers, The Eisenhower Marathon in Abilene Kansas qualifies as small town. I was not disappointed by the people or the race as I ran part of the famed Chisholm Trail.  (Watch the 1948 Howard Hawks masterpiece "Red River" to know more about that.) 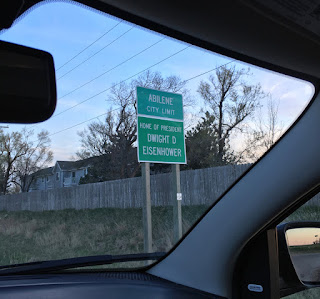 Splitting time between San Francisco and Los Angeles as I do, I quickly had a distinct sense of being somewhere “else” - a venture beyond metropolises. I flew into Kansas City from Seattle where I had been for our new office opening. Seattle itself is not big, nor is Kansas City, but within 20 minutes driving west on I-70, I was definitely in the country. Fields surround the freeway, and while not flat, definite plains are in abundance punctuated by a handful of small villages.

Any intestate buffers the driver from the realities of the local area in a way that back roads do not. I remember on a race in Wisconsin that I purposefully drove the local routes to enjoy the varieties I found. To reach Abilene though, pretty much the freeway is the only option not doubling the journey from two hours to four. Needing to check into my B&B and to make it to the race packet pickup at a reasonable time precluded those extra hours. However, since that freeway became a tollway about halfway to Abilene, I popped out of my Hertz rental cocoon to hand a few bucks to the toll taker. My first real interaction in Kansas reminded me that I was not Los Angeles any more. She thanked me with a smile and wished me a “blessed weekend” with a cheery wave as away I drove.

Nothing about this was fake or forced. She probably said the same words every minute of her shift. This was how she greeted the weekend and the motorists on their way to wherever. I pondered this salutation as I drove on to the center of the country. The midwest is known for being friendly, but I think those of us on the coasts either do not understand what this means or look down upon its honesty. Throughout my weekend stay, everyone I passed gave a nod or a friendly wave. At the $25 Neil Diamond Tribute concert I attended after the race (it’s ok readers to pooh poor this corny choice but it was actually enjoyable), my seat neighbors were chatty and inquisitive. Same at breakfast the next morning. And little time was spent on things like where you work and what not. Nancy and David at that morning meal dove headlong into a whole host of issues from local politics (they hailed from Wichita) to home remodeling to living in Europe which turned out to be a shared experience for all of us. Adrian the innkeeper at the Abilene Victoria Bed and Breakfast gave me a big hug when I left and told me to book early for the next marathon. 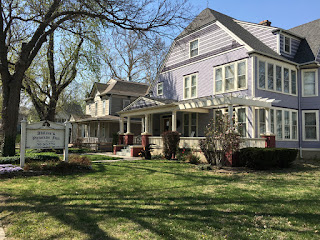 Wizard of Oz quips come quickly to one’s mind when in Kansas. And what is more famous in Kansas than Dorothy, Toto and that twister? Signs along the highway advertise the Oz Museum. When Adrian showed me their video library, Oz was front and center. (Referring to the VHS only selection, Adrian comfortably noted her inn was a bit “old fashioned.”) Yet, I refrained stating any movie quotes out loud and tried to keep them out of my mind. And I never asked directions to Smallville, another fictional Kansas hallmark of “small-townness.”

In fact, quite the opposite occurred. As I walked the rather deserted but not rundown streets of Abilene, I tried to soak in and enjoy the runner welcome signs. Nothing fancy, just a friendly greeting and acknowledgment a twelfth year of running visitors were in town. At the local grocery store, the woman who bagged my few items asked if indeed I was there for the race. I guessed she probably knew everyone who normally frequented the store. She offered me a big welcome and a genuine hearty good luck while marveling that I had come from as far away as California. I thanked her and did amiably offer a small quip as I apologized for all the “extra traffic.” She got it and laughed loudly but honestly as she handed me my sack of snacks. 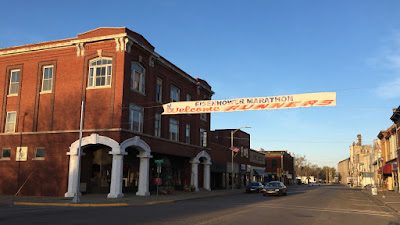 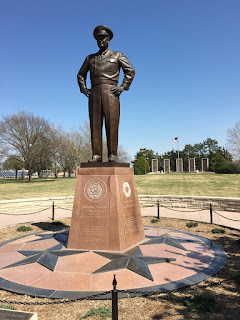 Dwight D. Eisenhower, Supreme Commander of the Allied Forces in World War II and 34th president, grew up in Abilene. This is why his burial place, library and museum sit around his ancestral small home. When Ike returned from World War II to multiple ticker tape parades, it was the one in Abilene that pleased him the most. He was born in Texas, but his family relocated around the time he was 2. So, Ike considered Abilene his home and the source of his friendly attitude and the reason for his winning smile. Having read a number of biographies of Ike and some of his own writings, this simple view of life is evident. He was not the orator of Churchill or the larger than life FDR or the big ego of Montgomery. He was closer to Truman (who lived in Missouri less than 3 hours away). Yet he was forged by the small town values and that of his military training and service. I have been a fan of Ike (particularly in his role of general) since working on Call of Duty and reading a flurry of books on the war. I found this visit to his home town (my second) relaxing and appealing.

The Inn I stayed in, owned and operated these past ten years by Adrian and Jay Potter, was delightful. Victorian in theme and name, the house was built in the 1880s. It housed Ike’s good friend Swede Hazlet (who is credited with encouraging Ike to enter the military academy) and is on the list of protected venues. The food was great with Adrian ensuring I did not have any dairy or gluten products. The 15 minute walk to and from the race another big plus.

Ike titled one of his biographies “At Ease” and that feeling was how I would describe my two days. In fact, I think this relaxed mindset translated into my fantastic run.

Starting at the Eisenhower Presidential Library, the double out and back course was not all that spectacular. We did a lot of roadside running and enough miles in a park to break up that monotony. The headwind on the outward tracks was annoying but refreshing upon the return legs when it became a push in the back. In the end, I clocked a 3:45:40 time - my fastest since July 2013. I would say I ran relaxed except when I had to really push against the wind. At the finish, I happily raised my arms to celebrate crossing off Kansas.

The next day after breakfast, I was back onto the concrete ribbon of I-70 to the bigger world but thankful for this chance to spend a few hours out of big city mode in the middle of the country.

Coming in my next post - Star Wars, Disney and Running - a perfect trio of races at Walt Disney World. 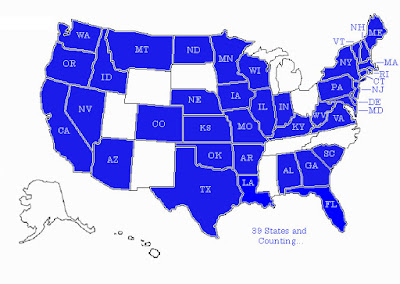