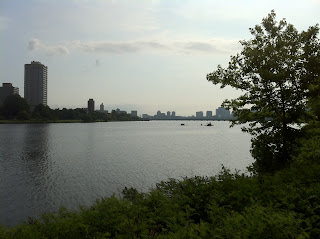 Five years ago this month, I decided to run my first race. That idea leapt into my head in Boston. Let me set the scene by relating my latest run.
On Friday, I took to the pavement of Cambridge and Boston on one of my favorite runs. Lining both sides of the Charles River basins, bike and running paths link the various bridges spanning the river boundary between the two cities. The paths wind past MIT, Harvard, Boston University and the famous Boston Half-Shell (where the Pops play on Independence Day each year). Depending on which portion you run, you might also pass by the Boston Science Museum, Harvard Stadium and even some awesome old common areas. Back in 2009, I ran about 22 miles (11 out and 11 back) which gives you an idea of how far you c
an venture.
Today's run measured a more bite sized 8.5. Departing from my hotel in Kendall Square, I headed west next to Memorial Drive. I passed the Mass Ave bridge, waved hello to my college dormitory, swept past the old Polaroid headquarters and continued on to Harvard. There, I turned left onto and over the Harvard St. Bridge, and then another left to head back east. This side borders Storrow Dr. I past through BU and then around the Half-Shell. I took the bridge back towards Kendall Square, the Red Line T trains rattling past as I crested the incline up and over the river. I rejoined the Memorial Drive bike path back to Mass Ave, turning right and finishing at 77 Mass Ave, MIT's front door. I then walked down the Infinite Corridor as my post-run cool down and a chance to enjoy being on campus. 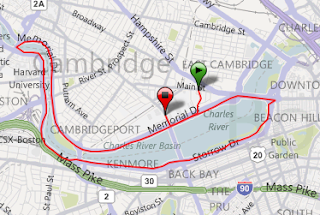 Yet I made one stop during those 76 minutes. You see, the birth of my running races occurred almost exactly five years ago on the Boston side of this same track. That seemed like a worthwhile event to commemorate with a few photos. So many of my ways of thinking developed in my years at MIT that I find the notion refreshing that my racing career started here too.
Let me wind the clock back and tell you exactly what happened (well as best as my mind can remember). I started running in February 2006. My nutritionist told me I needed to get more (ahem "any") cardiovascular exercise. While
a change in diet had proved successful in shedding some pounds, only an addition of exercise would fully help me maintain good cholesterol levels and long term health. My genetics do not bode well with heart disease, so my defense requires multiple preventative treatments. A friend in HR suggested I try running, and despite my misgivings that my knees could not take it, I laced up and tried it. I barely could go half a mile. Yet, I persisted and built up over the next few months to a couple of miles each time out the door.
Up to this point, the notion of running for anything more than exercise did not occur to me. I knew things like marathons existed; I had even been an actor in film school in a farce shot in and around the 6th LA Marathon. While at MIT, I spent a night in Hoptinkton MA and saw the start of the Boston Marathon. As a kid, I marveled while watching ABC's Wide W
orld of Sports at the multitudes crossing the Verrazano Narrows Bridge to start the New York City Marathon. Yet, I did not connect those events and myself.
One reason I could even start running in February 2006 related to my stepson Justin who factors into this month's anniversary as well. Justin developed a passion for outdoor activities like rock climbing and hiking. His high school offered a chance to spend a semester at a program high in the Rocky Mountains in Leadville, CO. Elevation: 10,000 feet above sea level. With Justin out of town starting in late January, I no longer needed to take him to school before I went to work. And I knew when he got home that he would obtain his driver's license. So, my morning carpool days ended for good when Justin departed.
Now flash forward to June of that year. Justin, fresh from conquering the passes at 14,000 above Leadville, has met me in Boston. We commence a 5 day North East and Southern college tour. Wanting to run around the Charles, I announce I am going out to do so on our first morning. When not hiking around those peaks, the school in Colorado required the kids to run for physical fitness. So, Justin and I both started running at the same time - but he did so in thinner air and with a 16-year old
body. Justin asks if he can go with me on the , and of course I eagerly agree.
We run down Mass Ave and turn right at the bike path. Our goal that day consisted of just a lap to BU and back. Heading west, we cross over the BU bridge to Boston. Another left and Storrow Drive slides under our feet. At about the half-way mark, all of sudden something happens.
Justin asks - can we walk a bit? Of course, I agree to, and we drop to a fast stroll. I had no sense of besting Justin - happily we are not competitive 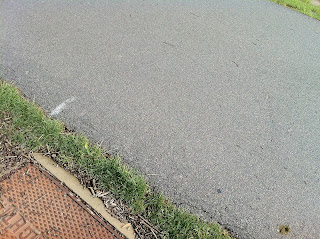 with each other in that way. In fact, I would say we both have a much stronger desire to collaborate and share. Yet all of a sudden, I start wondering about my running abilities. Had we even run 1.5 miles? How could a nearly 40 year old be in better shape than a mid-teen with more miles under his belt - and miles in very thin air up in the mountains? Could I actually be good at running?
That little piece of pavement in Boston changed my thinking about my running. I gained confidence immediately in my abilities. And I don't know why, but I wondered if I could run a 5k. I knew the Palisades Will Rogers race was that upcoming weekend on July 4. I did not know if they would take a registration that late (but I found out with a quick web search that they did). That short run and then walk changed my view of myself and inspired me to try something new. 14 marathons later, I am still appreciative of this new found passion.
And to be fair to Justin, we did resume running shortly after we stopped and made it all the way back to the hotel.
Would I have tried racing eventually? I am fairly sure I would have. But regardless of perhaps an eventuality, the origin of my racing story all began on a warm June morning along the backs of the Charles River. Five years ago this month.
Posted by Lairdo at 11:42 PM