Continent 3: Europe all day long after a long flight or two

Tromsø, Norway, June 2009
I cannot really recall how I found the Midnight Sun Marathon.  I think I was searching on marathonguide.com which contains listings of marathons all around the world.  The site does not have them all, but they show a lot with reviews by runners.  I already knew I would be running Boston in April 2009, and I wanted to plan a summer vacation in Europe.  I found an email from October 21, 2008 confirming my entry into the race as of that date.

Regardless of how Tromsø, Norway entered into my consciousness, I knew this race would be amazing.  If you go to Google maps, you will see that Tromsø sits right on the arctic circle.  Oh wait, I'll just show you with a picture: 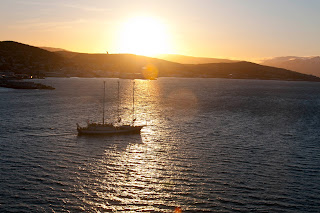 Yep, that picture was taken at 12:35 AM basically facing north.  That ship is going out for a pleasure cruise.  And I would say the photo makes the land feel darker than it really was.

The marathon of course takes advantage of the fact that it is run on the longest day of the year in a land that hasn't seen a sunset for 30 days and won't see one for another 30 days.  The race gun fires at 8:30 PM.  I finished at 12:14 AM.

Yet, I would say that my excitement about this event was not initially shared by Rebecca.  Here was my plan; I think you'll like it.

We go to London for a few days while I do studio work.  Then we head over Norway for the race and follow that up in Stockholm or Helsinki.  We had been to Oslo together in 2002, but only I had been to those other cities - and each case only for a day and a night.  I even looked at cruises we could take.

When I presented my plan to the President and CEO of Casa Malamed...  Well, let's just say I got the big, bright red light.  Well, I said, we're going to Tromsø for me; you pick a place.  And she did.  Switzerland - specifically Basel and Lauterbrunnen.  Now, I like Switzerland.  In fact, it's one of my favorite places to visit.  And Norway and Switzerland do both sit in Europe.  But I wouldn't exactly call them neighbors.  Of course I agreed stating that if she didn't mind the flying, that was fine with me.


So I worked it all out.  Now London is pretty far north compared to say New York City.  But Tromsø is another 10 degrees further north still.  And no direct flights from London showed up in any of my trawling.  Thus, we booked SAS through Oslo.

And then about half-way through the flight to Oslo, Rebecca asks me how long the drive to Tromsø is from Oslo.  Drive?  We have another 3 hour flight.  Well, let's just say that did not go over well.  Oh great.  Then she asks, do we fly from up north to Zurich directly.  Well, you see where this is going.

Happily, the flights all went on time, and the Oslo airport is so nice that you sort of forget you are stuck there.

But thank goodness that sun was up when we landed in Tromsø!  (It was cloudy the next day for the marathon.)  If you have never been that far north, you really should try to do so.  Not seeing night - the sun constantly shining - this is almost miraculous.  I remembered Michael Palin had visited the city in his second travelogue Pole to Pole.  It was as fun as he described and much more amazing in real life.

And guess what!  Rebecca walked the 4.2 km event (1/10th a marathon) and got her own medal!  To this day, that's the only event she has ever done.  Here's what I wrote at the time about the whole thing:

According to my watch, 3:43:15 was my time. That's way better than my goal of 3:50 and in fact my 4th fastest of my 7 marathons.  (It's also my 4th slowest if we want to be fair about it.)  The run was great fun.  The overcast weather mostly cooperated with the wind staying pretty low and some rain but nothing for too long or too hard.  Another neat thing about the race for me is that I ran my first even split.  That means my second half was the same time as the first half - that's great to do in any race and especially the marathon. And of course, we had another runner today (well, fast walker).  Rebecca completed the mini-marathon (2.6 miles) in around 45 minutes.  She really enjoyed it and then came out to see me just after the half point and at the finish line.

Two quick closing thoughts.  First, in the end, running and traveling to different spots in the world is something I'm very fortunate to do.  I particularly enjoy learning about new places, and running has become one way to see them.  Our taxi driver Bill took us on a brief tour of the Tromsø island (he was happy to practice his English he said).  The city is actually larger than we expected at 65,000 permanent residents.  It is the most northern city in the world and is one of the biggest by square miles (but they count the whole county as the city, so it's a bit of cheat to claim that).  It was settled over 200 years ago as a trading outpost by the Swedes, and the Gulf Stream keeps the weather reasonable.  But make no doubt about it, it gets cold her and never really that warm even in high summer like today.  It was in the 40's most of the day just a few hours from the summer solstice.  There is an University here, and Rebecca started a conversation with two German students in the local supermarket.  One has finished his PhD in Biology, and the other is in the midst of completing hers in the same subject.  They both hope to do research in plant biology and food.  So, they've come a long way to a study in a cold place, but they seem to like it.  In the summer cruise ships come every day, and in the winter they still get a fair amount of tourism for people seeking the Northern Lights. Do I feel bad about not being cleared on our travel plans?  Well, not really because it all worked out.  Of course, she didn't make it to continents 4 and 5 either...  Next up:  The Australian Bight.
Posted by Lairdo at 8:01 PM