What happens when the weather is nice?


The LA Marathon took over the streets of Los Angeles, West Hollywood, Beverly Hills and Santa Monica on Sunday, March 18.  The 27th running of the event found me lined up in corral B aiming for a sub-4 hour race in my fourth LA Marathon and 20th marathon overall.

If you have been keeping track the past few weeks, Sunday's weather forecast featured torrential rain, maybe some hail and a fair bit of wind.  And in fact, Saturday's Big 5K race had all but the hail.  Combined with last year's rainy marathon, my imagination needed no stoking to construct a picture of what I could expect.  In fact, I did not care too much if we got drenched during the run, but standing in the rain awaiting the start seemed miserable.

Yet expectations are not always realities.  And a cool day (perfect for marathon running) dawned on Sunday.  Not a drop of rain feel that I felt, and other than a windy run home on the beach after the marathon, I was comfortable, had a great time (literally and figuratively) and all around cruised.  (This past Sunday, we had all of the promised torrential rain, and I stayed happily dry inside.  The weather gurus had the right weather on the wrong day!)

The LA Marathon promises a monument every mile, and the race delivers great ones like Dodger Stadium, Walt Disney Concert Hall, Grumman's Chinese Theatre, Rodeo Drive and the Pacific Ocean.  As I ran, I started to think about the places I was passing and what were my personal monuments on the route?

As you all know, I run for various charities.  The Alliance for Children's Rights is an official charity of the LA Marathon, and I started my morning hanging out with the other charity runners and staff from the Alliance.  Given this is the second year we have run together, I knew a lot of the people.  This kept the morning relaxed and fun as the sun dawned to the east.

Mile 1 features Dodger Stadium, and we start next to the parking lot where I usually park for games.  Just being in the Stadium brings back so many memories.  Game 5 of the 1981 World Series and Fernando Mania.  Ron Cey hitting a grandslam in a game against the Phillies.  Beating the Cubs to reach the second round of the playoffs for the first time in nearly 20 years.  Hanging out with parents, friends and classmates at various games.  Plus my parents first date was at Dodger Stadium.

Mile 3 passes through downtown.  We run right by City Hall, a fabulous 20s building with a ziggurat top.  At one point in time, Charles Lindberg donated a spotlight that shined from the observation deck.  They found it a few years ago but it's not installed at the moment.  I recall going on a tour during a summer camp outing in the 70s.  We all piled into a small elevator to reach the top.  It was packed, and I started to get freaked by the confined quarters.  (I was in the center of the car.)  My counselor told me to think about ice cream cones lining the walls, and the mental trick worked.  Great advice that has never left me; think about something nice when you are uncomfortable. 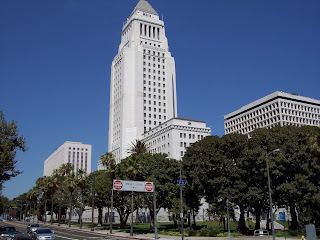 Zipping along to mile 8, I passed KCET, LA's TV channel 28 and former PBS station.  7 years ago, Activision, USC and KCET partnered to help build a game about civics and the Constitution.  This project inspired me to think seriously about moving to do educational games, and it allowed me to reconnect with my current boss at USC.  We had numerous planning and design meetings at KCET, so I was familiar with the location.

At Mile 11, we pass the Max Factor museum.  Max Factor was a great-great (or maybe one or two more of those) uncle of mine, and my family worked for the make up company for many years.  My great uncle Gene helped develop Lucille Ball's make up for "I Love Lucy."

The Pacific Design Center slips by as mile 15 elapses.  For years, I got to go to the HBO Emmy party thanks to my friend Jason.  One year, Rebecca and I took advantage of my TV Academy membership and attended the Emmy ceremony as well.  I would not likely go a second time (long!), but the experience was great!  (I do miss the party though.  That was always good.)

MIle 16 is the Beverly Wilshire Hotel where I had my Bar Mitzvah (and my sister had her Bat Mitzvah).  My friend Miri was positioned there to snap the great photo at the top of this post before she had to bolt for the airport.

Mile 17 can be officially called Sandi and Ken Corner.  Located just a few feet from their office building, my parents have been at all 3 marathons that have been run on this course complete with water and waiting arms to take some drop of sweaty clothing and other items.  They even get them cleaned which is above the call of duty.  My mom brought a bag this year, so she was ready for the drop.

The Alliance had a tent at mile 20 to celebrate their 20th anniversary (or was that for my 20th marathon?).  In any case, I got a big cheer from the team there as I blasted my way into the VA Center grounds.

Mile 23 is the Brentwood - Santa Monica boundary and the Brentwood Country Mart where I had many a lunch during my senior year of high school.  I still go there from time-to-time!

Miles 23-26 zip down San Vicente to Ocean Ave.  This is my home turf.  I run this stretch all the time.  Usually I'm on the grassy median and not in the street, but otherwise, this is as close as I can get to running a marathon in my backyard.  In fact, I ran that whole section a few days ago during my 14 mile run.  Knowing I felt a bit of a leg cramp coming on, I had to actually hold back as the course drops 200 feet over those last 3 miles.

Summary
At one point in my running career, the thought of running the same race twice did not appeal to me.  Yet, having now run the same course three years in a row, I can see the benefit of doing so.  Knowing the course gives me a ton of confidence that I cannot imagine any other way to get.  I felt a tinge of this in the 2011 NYC Marathon too when I ran it for a second time.  I've applied for the 2012 one as well.  And I will be back in March 2013 to run LA another time.

That does not mean I want to repeat a race every time.  I like traveling way too much to not combine marathon running and visiting new places.  But I can also see the benefit of repeat runs.  So, what started as a worrisome weather adventure became a reflection of my life in LA and about running in general.

Thank you all again for your support and donations!  We raised a ton of money already, and London is still 4 weeks away. 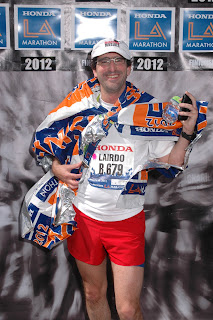