Training for the 50 Miler Part 2: 35 Miles Into the Woods and Fields

(This is the second of an ongoing series about training for the JFK 50 this November - my first run at the 50 mile distance.  Part one can be found here)


13 weeks to go until the JFK 50 on November 17 - part of my personal 50/50 Challenge.  Having run any number of marathons, mainly on roads, I know how to prepare for the 26.2 distance. Even now with three 50k (31 miles) ultramarathons, I have a sense of being ready for those.

The JFK 50 will feature 19 more miles and almost all of it on trails and gravel roads.  Both this longer distance (and longer time) and newish surface to me require training.  Sunday, August 19 offered me a chance to practice them all at the Turkey Swamp 50k in Freehold New Jersey where I cycled through is lovely county park twelve times.

My trusty Marathon Maniacs website helped me locate this New Jersey Road Runners organized race.  And in fact, soon after arriving at the event, I quickly found fellow marathon maniacs out for a trek over dirt roads, through forest single tracks and across open grass fields.  Fortunately, the weather stayed around 70 and cloud cover moved in after an hour of running to keep us from too much sun.

For me, my added challenge was pushing my longest run up to 35 miles from a previous high of 31.  I started about 40 minutes before the race and put in 3 miles at an easy 10 minute pace.  Then after a 20 minute gap (the race started late), I attacked the race which ultimately measured 32.6 miles for me.  These field and trail runs often are longer than advertised. So, in the end I ran 35.6 miles.  Slowly. In total, I was out just over 6 hours - a new max for me as well.  I finished 10 out of 25.


How do I pass 6 hours?  Mostly my mind wanders during the easy bits.  For this, it was time on the laps that was run on the roads.  Yet when I came to the narrow and rooted forest trails, I really focused.  Raise each foot fully.  No dragging even on lap 12.  I slowed way down to get through these minor obstacle courses and put my arms out almost like a tightrope walker's balance pole.  I spoke aloud to myself as if my own coach.  Tripping was not an option.  Face planting scares me.  So in these sections I was very conscious of my body and my running.  Thus the race was interesting in that I had periods of focus and periods of zoning out.

Twelve 2.5 mile loops can hardly be called scenic after more than a few laps.  However, I did not really mind the repeats.  In many ways, the repeat helps me run better.  You begin to know where to step, how long until the next walk break and where there is a bathroom.  Yet, around lap 8, I began to be unsure about which lap I was on.  I would have to check my distance on my watch and ask every time I cleared the checkpoint at the finish line.  I mean I sort of knew but was always a bit shaky on knowing for sure.  Was this because my brain was starting to not get enough glucose?  What will happen as I push my running to 40 and 50 miles?

And then there was this slow time.  In my past 50k's, my body had demanded more and more breaks as I got close to the final distance.  Yet, this race, I think I just naturally slowed to a good pace.  I was already slower than normal given the surface challenges.  I kept to my 2 min walk breaks every two laps.  In short, the run just worked but it was slower than I had hoped or thought I could do.  In fact, I was over 30 minutes slower than just 2 months ago at Niagara.

What does this say about my upcoming 50 miler.?  I am hoping for about 9 hours.  And actually, 6 hours for 35 equates to 3 additional hours for 15 more miles.  That would be an average of 12 minutes per miles or 5 miles per hour. But those are miles battled after 35 including 13.5 miles in the Appalachian mountains.  So, I am thinking I may need to up the goal to 10 hours.  Or is that lowering the goal?  I guess it is.

I did run the last half mile in a swift 8:10 pace, and I felt fine after the race particularly once I got some pretzels into me.  I then drove to Philadelphia and took the train to DC. (Yes, I showered first.) I also was with it enough to take most the photos in this post during my last lap including this one of Bill and Laura, two fellow maniacs. 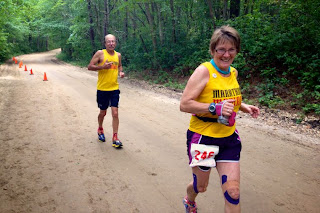 All-in-all, this race was run very well.  I accomplished my goal of running 35 miles and added in more trail surface time.  I learned more about my pacing and expectations.

So what's next for the 50 mile training?  In September, I hope to run two marathons in two days in two different states. Check back for an update on that in a month. 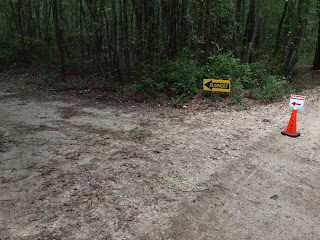 Postscript
My second 50 state goal was moved forward as well. This race was the first I had run in New Jersey, so it locks state number 8 in my quest for 50 by 50. 42 to go. 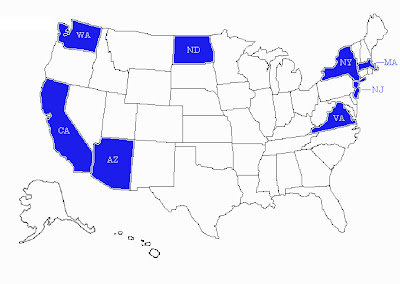