Just in time for Giving Tuesday, I have launched a fundraiser for Children International. CI (children.org) is a non-denominational group creating and supporting education and health in developing countries. We've supported them for over 10-years by contributing towards 4 young women in the Philippines (actually, 2 of our original supportees have outgrown the program, so we are into our second set). I've gotten to visit their centers in Chile and India. This year, money will go towards HOPE Scholarships, which help graduating kids reach higher education.


Every donation will be matched 1:1 by Rebecca and me. 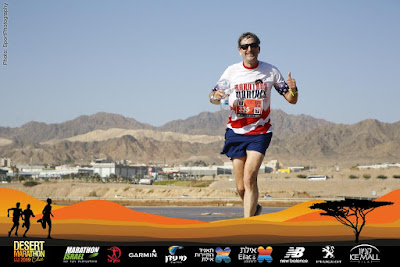 To give, you have three easy options:

Donating to CI directly. https://www.children.org/make-a-difference/donate
(when using this method, please note it is for Laird Malamed or RunLairdRun. This way, CI can count up the donations for the matching funds)

Thank you to the people who have already contributed. Remember, every donation is matched. 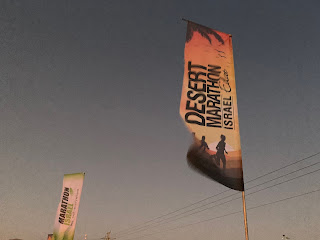 Beyond Thanksgiving and Giving Tuesday, the timing of this fundraising drive links to my latest marathon. On Friday, November 29, I lined up ahead of 6 am, just before the sun crested the Jordanian hills to the east, with about 400 other marathoners representing some two dozen+ countries. The task: A simple trollop in the desert hills in Eilat Israel with a background of the Red Sea and the end of Jordan River Rift Valley.

The outcome: A challenging and rewarding scramble up and down in soft sand while avoiding hard protruding rocks as the sun and heat rose.

After nearly two weeks in Israel including a brief but amazing overnight to Petra Jordan, the penultimate day of this journey featured what would be my 87th marathon (or longer) race in my14th country. (See list at the end of the post if you are curious as to the preceding 13 countries.) Weather was perfect around 60 degrees F, although the morning would bring 70s before the race's end. Wind gusted from the north and provided some annoyances in and around Eilat, but the course's dashing between hills provided protection for the bulk.

As the announcements spilled forth in Hebrew and English, shoelaces were tightened, gel packs checked and GPS watches beeped their satellite synchronization. I could hear the babel of vocabularies advertised by the international nature of the race and emphasized by our home country flags inked upon our race bibs. Hebrew predominantly, but surely that was Italian over there and was that not Romanian (as I tried to catch the language as well as the printed emblem). I spoke briefly to someone from Hungary who had flown in the day prior for the race and was on his way out afterwards. A couple from Japan was off to my left. At the airport were even more post race runners (some likely doing the more popular half marathon race).

The flags (and fact that our names were in Hebrew for Israelis and English for the rest) had a functional component as well - when approaching a water stop, the volunteers would always speak Hebrew first but then catching site of the bib, switch to English. That or my blank stare would trigger their dialect choice. Or my Marathon Maniacs shirt. In any case, they figured it out. 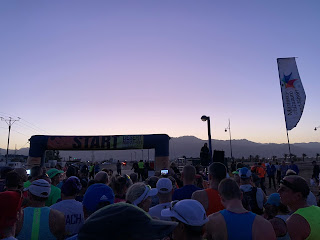 At 6:01, just a minute late, the announcer droned out the countdown:

At the shout of that final "one," we were off into the wilds.

The first few miles skirted the outskirts of salt ponds, where Red Sea salt is harvested. Frankly, I've never heard of products using this salt, as the more famous Dead Sea Salt, captured just 100 kms north, seems available worldwide. However, as with much in Israel, water and land are often seen together - whether in big long coastlines of Tel Aviv, Caesarea and Haifa or in much smaller Jordan River crossing points. Water is the lifeblood of humans and using and transporting water - or finding natural springs - is an issue that dominates the landscapes of the Middle East.
Once you get away from water, as we did, turning west to cross under Highway 90 and then head up into the edge of the Negev Desert which sits just beyond the tourist hotels and shabby boardwalk of Eilat, water is very much not visible.

When selecting this marathon, the choice was pretty much made for me by the timing of the trip to Israel. Thus, other than being aware that the course would feature a number of uphills (over 1800' of climb in total) and be on dirt roads, the selection criteria was really just a criterion of the date. The timing linked well with the over loop plan of visiting Israel (Tel Aviv - Galilee/Golan - Jerusalem - Dead Sea - Petra - Eilat) - an upside down "U" ultimately completed into an oval by a short internal flight for one last night along the Mediterranean.

As my feet hit the dirty roads, I wondered if perhaps a bit more practice on loose surfaces might have been wise. I had done many hills in preparation, including a big run up to Hebrew University in Jerusalem, affording views east to the West Bank and back towards the walled city. And, I would say I never felt challenged by the hills on this marathon. Dirt and rocks - those were, shall we say, interesting. At one point, I, fortunately, only just clipped the top of a protruding stone. The slight stumble was enough to warn me of the lurking face-planting potential. Visions of abrasions, scrapes or worse kept my toes in the air and often my eyes on the ground. 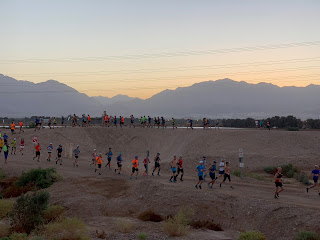 This was in fact visible in my Garmin tracking metrics. My average stride length was 0.91 meters. This meant I was taking shorter steps. My previous recent marathon, in Boise Idaho in October, saw me complete that race on a relatively flat course, on mostly bike paths, with 0.98 meter strides. Yet my vertical ratio was the same in both, meaning I achieved the same clearance but in less distance in Eilat. Shorter steps to ensure I was not stretching my leg reach which could be at the risk of hitting something and being unable to adjust with my body elongated to my maximum. 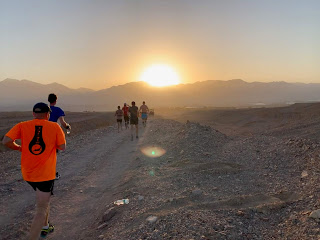 Despite competing in my 87th marathon, I really had not experienced this type of course. My Winterthur Switzerland marathon in May 2019 was also in hills and on trails, but those paths (and you can insert comments here as to Swiss precision) were well manicured and smooth, much more like the paths in Washington state I run. When the organizers in Israel advertised a DESERT marathon, they could not be accused of falsely doing so. Their pre-race briefing materials (also bilingual in Hebrew and English) definitely noted the risks of the road.

Remarkably, within 5 miles of the race, I began to discern patterns and develop strategies. For example, when two paths crossed or merged, the resultant intersection often accumulated small dunes of loose gravel. Slowing down to scramble over them was better than attacking them at speed. I even felt that the course was "designed" to have a series of challenges. When the ground was compacted, the going was faster - at the risk of far more rocks poking their iceberg like tops out into the air. So, one could speed up (better traction) but one had to be more aware. This compared to the loose, sandy roads. Here, traction reduced speed, but the loose sand tended to bury the rocks more completely and reduce tripping risks. 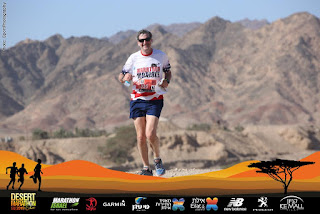 Whether intentional or just the way the course made sense to design to achieve the needed 26 mile /42 km distance, most of the first half of the race was in shade or away from the sun. The shade was due to running between hills, with the low autumnally sun unable to cast its rays into the dales. This lead to another strategy - when in the shade, speed up! At least as much as the terrain allows. In this manner, my race, rather than being an even set of paces became staccato as the elevation, rocks and shade interplayed. This is best seen on a graph of all 26 miles where one of my best times was in mile 7 going uphill - but uphill, in the shade, on solid footing. (Taller bars represent faster times.)

My finishing time was a respectable 4:06. I ran the 2nd half faster than the first, which is likely due to the more descending nature of those last 13 miles. However, the shade was gone, so there was still more effort required to deal with the heat. I knew I would need a 1:56 second half to beat 4 hours, but at mile 21 as we hit another small uphill, unshaded patch that this was not going to happen. Plus running downhill on loose dirt is not conducive to being fast. I can attest that my quads felt this race for a few days. 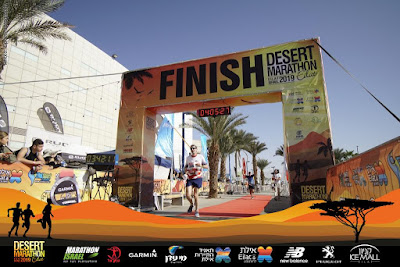 Strava has a measure called relative effort, and that social running/biking site assigned me a 500s score. Interestingly, this was the same as my 2018 Boston Marathon, also finished in just over 4 hours but with much harsher conditions (rain, freezing temps and a strong headwind). The Eilat race never felt like that, but I would say it was mentally more challenging and tiring.

Again, looking at Boise from October of this year with a time under 3:45 in chilly weather but on a flat course, I would rate it as more than 20 minutes easier. Boise did not require much thinking or strategy. I decided to run about 3:45. I went out and ran that time (3:43 actually). In Eilat, I went out to run about 4 hours (but was going to be happy at 4:15 or even 4:30). 4:06 required me to think my way through the race and to be very, very focused on each step. 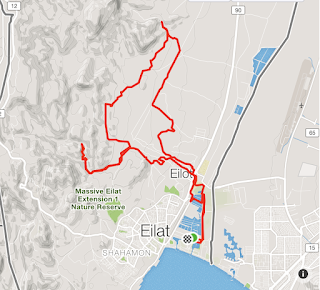 That's what makes running in different places fun. The sites, the people and the new course. So, wherever you exercise, try that. Find a new path; do a destination run or hike; experiment with types of workouts. The reward is a satisfaction of being able to tackle new challenges, and that will overlap to everything you do.

Thanks for reading and your support!

Here's a reminder of how to support my running charity efforts. Thanks in advance:
To give, you have three easy options:

Donating to CI directly. https://www.children.org/make-a-difference/donate
(when using this method, please note it is for Laird Malamed or RunLairdRun. This way, CI can count up the donations for the matching funds)