Sunday dawned brightly upon verdant Vermont and Waitsfield, the home of the 5th annual Mad Marathon.  Started by Dori Ingalls in 2011, the marathon supports a few local charities including Hannahs House which helps mentally ill people in need.  Not knowing this before, I was happy to learn why so many people were wearing running shirts emblazoned with that logo. (Around mile 22, I finally asked.) 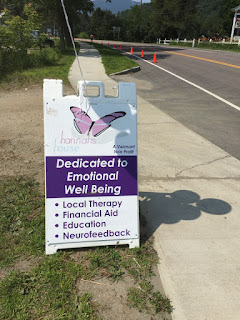 If you have had a chance to read the proceeding blogs, then you are likely bored of hearing about this race!  So, the short story is this:


Still with me? Then let’s get into some details.

Strangely, I did not sleep well before the race.  Normally I do, but it’s hot here and I think that had something to do with the tossing and turning.  When you wake at 2, 3 and 4 and don’t need to be conscious until 5, doubts start to settle in.  The race schedule stated 7 am for the gun to fire, and I like 2 hours ahead. This is not about preparation time - I can get ready in 15 mins for a marathon.  I just prefer the body to do its thing if you catch my meaning before I run.

So, all, em, ready at 6:35 am, I heading across the street to the starting location.  I made it just in time to jump into the obligatory Marathon Maniacs photo shoot (which in looking on Facebook, I see I am just off frame - oh well).  Anyway, due to re-construction of an 1833 bridge on the course, we will be starting two waves.  Those 3 hours and less go first and those of us over that run 1 min later.

Race Director Dori fires the gun for wave 2, and I’m off.  This is a hilly marathon. It features 1950 total feet of elevation gain.  What I quickly discover is that there are really no flat bits.  There’s lots of ups and lots of downs.  Most everyone walks the super steep parts.  No shame in that.

Somewhere on the first down, my buddy Jc taps me on the shoulder.  We’ve run parts of races in Fargo, Niagara Falls, and one other place neither of us could remember.  We were also both at the Route 66 Marathon together too but never saw one another.

Jc knows everyone.  I mean everyone.  The route features a series of out and backs, and as we were returning, he just kept calling out names of people going the other way and introducing me to them.  Small races like this are just great for that.  There is really a community feel; it’s low key.  In fact, I am finding Vermont to be very relaxed overall, but this small race feeling is pretty universal.  Dori greeted us upon our finish and took pictures with us.

The scenery is why you come to run this race, and it does not disappoint.  From tall trees to distant mountains, the race really featured a lot of this central Mad River Valley.  Because I am crazy, I took a bunch of photos.  Jc patiently walked while I did this, and he even snapped the one of my on the course running backwards so I could pose.

A bit on Jc’s resume.  Today was his 199th marathon.  He will hit 200 next week in Colorado. His wife was running her 6th today, and his daughter, sister and brother-in-law were running too.  Two other daughters greeted us around mile 24.  So, it was a family shindig for him.  He finished his 50 states 2 years ago a week after his 50th birthday. I cannot recall if he has done the continents yet, but he did give me a good recommendation for the Philippines where he is originally from.  But let it be known there are people crazier than I with my party 140 less marathons than he has.

Fortunately, the worst of the course happens from mile 6 to about 18 leaving the last 6 miles or so pretty all downhill other than one big dip and a small uphill to the finish.  We both came in sub-4:15 which considering the terrain was quite good.  We finished 68 and 69 of about 300.  Not bad for two old men who promptly dropped our hot and tired feet into one of two inflatable ice pools kindly provided by Dori and team.

This was my first birthday marathon, and it was great.  I was well prepared, ran with a friend and met a bunch of new ones.  I’ve completed all of the New England states and 33 of them all.  And all of your contributions have been amazing.  My goddaughter called me a little bit ago.

Thanks for making birthday 48 super special.