My trainer used to sing (if one could label what he did “singing”) that ditty prior to the start of San Francisco 49er football games. While the trainer’s name is long lost out of my brain, the tune has stuck with me. I think the original lyrics relate to Carolina or something, but the 49er part is on my mind.

Where the forgotten trainer thought football, I think the passage of years; 49 years of age in about 90 minutes. I hold no concern for the passing of the clock, nor does starting into my fiftieth year give pause. I enjoyed 30 and 40, so I expect the same of 49 and 50. (Anyway, I always dislike prime number birthdays - 31 sort of stunk. Fortunately less and less primes as you get older - only 53 and 57 to worry me over the next decade.)

49 is a fun number. 7 times 7 is cool. Nice and symmetrical - a pair of 7s melded together into a square. The roman numeral version is sort of unique too: “XLIX” is literally 40 and 9 meshed together. (If you are wondering why the number is not IL (1 less than 50), read this set of theories: https://www.quora.com/Why-do-we-write-49-in-Roman-numerals-as-XLIX-Why-dont-we-write-it-as-IL)

To celebrate my 49th birthday, I am kicking off a series of challenges - some to my friends (this one!), some for me and some with my Oculus running pals. I’ll talk about each over the next few days leading up to my next marathon - the King Salmon Marathon in Cordova, Alaska.

As I did last year (see this post), I am using the occasion of my birthday to raise money for three great charities and specific initiatives within them. Tired of reading? Here’s the link to the JustGive site - thank you!  https://www.justgive.org/lairdo49

Children International is a nondenominational organization creating and running education, sports and medical facilities in a number of developing countries worldwide. I visited their Chilean site in 2011 (a place now closed as Chile is no longer considered a developing nation), and we have supported 4 children in the Philippines for a number of years. Donations to CI go to support a new facility to serve over 7,000 kids near Daraga Philippines. Last year, we funded the RunLairdRun Room in a facility in India opening in 3 weeks! That sports themed room will be part of their athletic program.

New to our fundraiser this year is the California Science Center. I was honored to be elected to the board of trustees and began serving in January. This is the home of the the orbiter Endeavour. I have been going to this museum since I was little. Donations will support Science Camp Scholarships.

Thirdly, our Oculus charity that I helped begin in 2013 continues to provide scholarships to the University of Maryland’s Computer Science program in memory of Oculus cofounder Andrew Reisse. I was able to visit the school in late April, and I am hoping to return in the fall to meet with a number of professors and students interested in VR.

However, I won’t expect you to to help out these amazing causes with me sitting around idle. Last year I ran on my actual birthday - the first time I have been able to achieve that.

While I could not find a Tuesday marathon for this year's run, fortune still smiled on my running endeavors with a tidy coincidence. I can run in the 49th state of the union just a few days after I turn 49 - a state I need on my way to my 50 states, 50 marathons by 50 goal. Saturday, July 16 will find me at the Copper River (mmm, salmon!) chomping my way through 26.2 miles. Turning 49 by running in state 49 is a perfect pair. I’ve asked that my bib have 49 on it if possible, so we’ll see how that request fairs. (In fact, Alaska will also be the 49th state I have ever been to since I do not count the remaining one - Michigan - where my only 2 hours were at the Detroit airport.)

But why stop at 1 marathon when you can run 2 in 9 days? Only my second ever Monday marathon (the first being Boston in 2009) will find me up super early to run in the Desert News Classic on Pioneer’s Day in Utah - a race that finishes among the Salt Lake City Pioneer Day Parade.

By the way, here's the current state map - I'm looking forward to filling in Alaska and Utah! 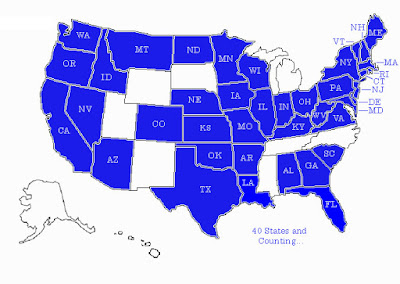