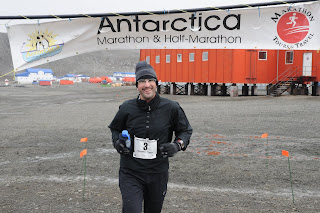 I wanted to give you a more complete version of the race after my very brief update yesterday. Again, thank you for all the contributions to my various charities (CODE, The Alliance for Children's Rights and Children International). I have not had a chance to get a current count, but I saw a lot came in over the weekend. So, thank you so much. One half of my double marathon challenge complete! LA Marathon hits on March 20. justgive.org site.

As I wrote yesterday, the marathon went quite well. Really, the time (and this is not an excuse) doesn't tell you how happy I am with the way I ran. The official final time was 4:25:32, and I came in 9th out of 78 finishers which puts me in my usual top 15%. My time is about 45 minutes slower than my average - again to be expected. The top finishers, Mike Hewitt from Denver who is here with his wife and two kids ran in 3:25 for the win. He just came off a 2:41 marathon, so again, 45 mins slower. You can see in the photo below pointing at a ready-to-attack skua.

The day before the race, the organizers went on shore determining the course and getting final approval from the base staffs for the event. In past years (and the adventures of this marathon's history could fill four emails), they have had hiccups in getting permission to run. As King George Island houses bases from numerous countries, and our run goes next to or through four of them (China, Russia, Uruguay and Chile), international permission has to be obtained in advance. Even then, the day of the race is a decision by the base commanders to allow the marathon to happen. Happily, all four bases presented no issues. 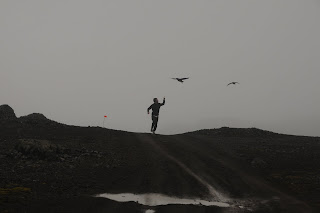 The "okays" in place, the marathon team then inspects the various roads linking the bases. First and foremost, they need to ensure that no animal life (including the native mosses) could be impacted by running the race. In past years, the race included a run up a small glacier. However, the glacier now shows too many signs of crevasses (hidden cracks) and melting to offer a stable enough platform. So, one of the challenges becomes finding 26.2 miles of runnable surfaces. The solutions involves multiple out and backs. If that sounds disappointing to be covering and recovering your tracks, actually I think everyone found this aspect of the course to be quite enjoyable. Because we have been hanging out together (I'm in the club lounge writing this amongst 30 other passengers as icebergs flow by the windows), you basically know everyone on the course. So, as you double back, you pass just about everyone at least 3 times. Waves and high fives are exchanged, and words of encouragement flow easily between competitors. Of course, the course staff and monitors are from the marathon team and the boat crew so again there is a small town feeling to the whole event. You literally know everyone - or at least have seen them over the past eight days.

Let me try to describe the course a bit. We started the race at the Russian Bellinghausen base. This once large base of red building and barracks, satellite dish and inflated science buildings used to be Russia's key installation down here. However, after the fall of the Soviet Union, cutbacks took their toll. The smaller base still has the best landing beach and makes a good starting point. The start (and finish) line were in the middle of the base. (Actually, the marathon started 0.1 miles behind the starting line as the course worked out to 26.1 miles - just short of the full 26.2 marathon.) 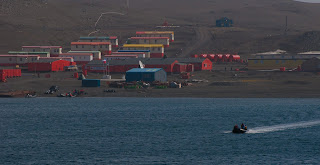 (By the way, technically I participated in my first amphibious assault of a Russian base. Well, first daytime landing but that's another story.)

From the Russian base, we headed into the island 1/2 mile towards the Chilean base, turning left before the road to the only airstrip on the island. After a few steep portions we were on the way to the Chinese Great Wall base. This took us past a small lake (pond really) and into the base itself. After about 2.5 miles, we reached the end of the road, marked by some huge fuel tanks, and headed back to the start. The conditions of this road were pretty good. Mostly hard packed dirt with some rocky portions comprised of 3 inch sized stones. We hit a bit of sticky mud, but very little you could not step around. I think we had about 4 steep rises on this part. Outbound, we ran with the wind and back against it.

And speaking of wind! On the Beaufort Scale which measures such things, the staff estimates we saw gusts above 35 knots. (Nearly 40 mph.) That's an 8 out of 12 on the scale: Category "Gale Force." Generally, the winds only hit category 7 - "Near Gale Force." Just another run in Antarctica.

Those winds were worst on the other side of the course. After the first 5 mile lap, we headed north towards the Uruguay base. About 0.5 miles of this 5.5 mile out and back were covered in thick, sticky, wet mud. Other portions were crossed by glacial run offs requiring fording the water or (as I did) a few well timed long jumps. Both sections (but particularly the mud) pretty much reduced you to walking. As I do with any ultramarathons, I walked all the steep hills (of which this portion had a half dozen). Wasting energy trying to run up them never really resulted in better speed. The windy sections needed the same treatment. If I had one complaint about the marathon, it would be that you never could really just open up and run hard. I think that is why so many people are feeling pretty good today; the walking broke up the running monotony forcing a more balanced use of muscles - speed sacrificed for better biomechanics. For some, this was a big disappointment; for me it will help my LA Marathon go better by not using all my reserves.

Back to the course, upon reaching Bellinghausen again, about 10.6 miles had been covered (including the 0.1 mile pre-starting line addition). We then ran both the Chinese and Uruguayan sections again. Two more times through those mud flats.

I wish I had taken a picture of my shoes! By the end of the 21.2 miles, they were caked and covered in dark, yucky, HEAVY, mud. Planning ahead, I had a second pair of nearly new shoes. So, after those two laps, despite the 3 minutes needed to make the change, I switch out my trail shoes. Oh my goodness, I felt like I lost 5 pounds. The staff at the finish line who saw me do this (we had our packs under cover near the start/finish area) laughed when they saw my pristine looking treads. The final 5 miles were accomplished by a third trip to China. I certainly was happy to avoid going back through those Uruguayan mud fields.

Rebecca made the trip over from the ship (as part of her first {daylight} amphibious assault on Russia) just in time to see me finish the race. After the official photographer missed me crossing the finish line, I made a short lap back through to memorialize the event. (Sorry, the photo hasn't been sent to me yet.) I caught up with my buddies and changed into warmer clothing and returned for a very needed hot shower and hot lunch aboard ship.

People took up to 7.5 hours to finish the race; I cannot imagine being out there longer than I was. I did feel very strong when I finished. My last half mile (really the best running part of the course) was in under 4 minutes (less than an 8 mph pace). But, I certainly did not need to run any further. I think a mark of how I ran was that I was probably in about 15th place after the first half. (Because of the out and back nature, I could see everyone in front of me as they returned from the turns at either end.) Without trying, I passed 5-6 people by keeping my pace going. Two people who I passed around mile 20 said to me afterwards they were amazed. All of a sudden I was just past them and gone. I don't recall it the same way, but thus are the vagaries of memory amidst running a race in Antarctica.

After the race completed, the Sea Spirit heaved anchor and sailed to the Antarctica Peninsula for 4 more days of landings. 7-8 orcas greeted us as we departed, and today we saw arctic seals, gentoo penguins and humpback whales. Pretty amazing!

Thank you all for your support over the past few weeks in preparation for this amazing event. I'll report back when we hit Argentina and can post a whole slew of photographs.